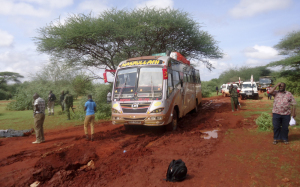 The attackers reportedly ordered the victims to lie down on the ground after singling them out for not being able to recite an Islamic creed.

According to one of the passengers, identified as Ochwodho, who luckily escaped unhurt after pretending to have been dead, the victims were shot at close range by two gunmen.

Kenyan Police chief, David Kimaiyo confirmed nineteen men and nine women were kill in the bus attack.
Al-Shabab claimed responsibility for the killings through its radio station in Somalia, saying it was in retaliation for raids by Kenyan security forces carried out earlier in the week on four mosques at the Kenyan coast.