…As Officers turn their backs on Mayor 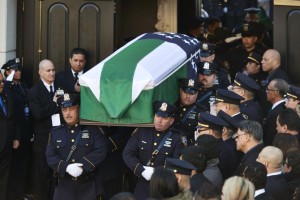 More than 25,000 police officers from throughout the United States and Canada paid last respects for New York Police officer, Rafael Ramos, one of two officers who lost their lives while on duty last weekend.

Police Commissioner Bill Bratton, who delivered eulogies during the service announced he was appointing Ramos as an honorary NYPD chaplain and posthumously promoting Ramos and his colleague, Wenjian Liu to the rank of detective.

Ramos and Liu, were gunned down December 20 as they sat in their patrol car in Brooklyn Ismaaiyl Brinsley, who later shot himself at a subway.

The gunman had posted angry messages on social media against police saying, ‘’they killed one of us, let’s kill two of theirs.’’

Brinsley, apparently was referring to the death of 18-year-old Michael Brown who was killed by police in Ferguson, Missouri two months ago.

Meanwhile, a cross section of officers of the New York Police Department turned their backs to the church when Mayor Bill de Blasio delivered the eulogy.

A similar action was taken by officers when Mr. de Blasio attended a press conference last week at the Brooklyn hospital where the officers’ bodies were deposited.

Tensions between the NYPD and the mayor came to a boil during recent protests after a grand jury declined to indict an officer in the death this summer of Eric Garner in Staten Island.