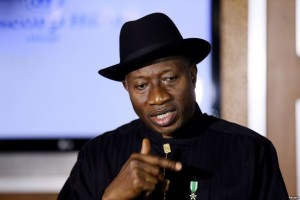 President Good­luck Jonathan has told ex Nigerian Head of States to express their feelings about his regime through the National Council of State, and stop criticizing him in public.

Speaking on Christmas Day, at the St. Mathews Anglican Church, Abuja, President Jonathan, who many believe was directing his statement to retire military Generals Olusegun Obasanjo and Mujammadu buhari, accused the former rulers of attacking the current government through the press.

Former President Obasanjo, and All Progressives Congress –APC, Presidential candidate in next year’s election, Gen. Buhari are among many notable Nigerians known for their criticisms of the Federal Government.

Jonathan also criticized himself and other politicians who make ”provocative statements,” saying that political office seekers should not sow seeds of discord.

“Those who take govern­ment by violence, look at African countries, those who kill to take power, they never end well. Few cases, yes, probably in a society not everybody goes the same way but on the aver­age one has recently hap­pened in West Africa’’ the President said.

“If a politician wants to take power whether at the House of Assembly level, at the House of Representa­tives or Senate or governor or president, you don’t sow seed of discord and enmity because of course, it will consume you.

“As a nation, we know that if anybody who has the privilege of being a gover­nor of a state after serving, he becomes a senior citizen of that state, it is your duty to assist in-coming govern­ment’’ Jonathan added.