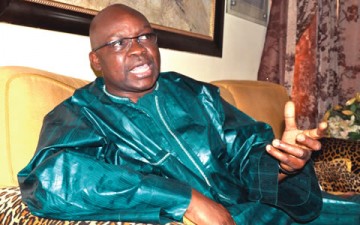 The Ekiti House of Assembly on Wednesday passed the 2015 Appropriation Bill in what seems like another legislative coup.

The seven members of the state’s Peoples Democratic Party –PDP, ruling government under Governor Ayo Fayose passed into law a sum of N80.9 billion as budgetary provision for the 2015 fiscal year.

The budget passed at a plenary, without media coverage by the seven PDP members was about N160 million higher than the N80.77 billion present to the House by Gov. Fayose on December 15.

The Speaker of the Ekiti House of Assembly, Dele Olugbemi defended the increase, saying the House added N200 million to Fayose’s estimates as a result of urgent repairs that needed to be carried out in the House of Assembly complex.

Meanwhile, the budget presentation has triggered anger from various quarters including All Progressives Congress –APC, legislators.

In a swift reaction to the presentation, former Speaker, Dr. Adewale Omirin, has described the passage of the budget estimates as “an illegal and futile exercise.”

According to a statement by Omirin’s media adviser, Mr. Wole Olujobi, the seven PDP lawmakers that sat behind closed doors to pass the budget had already been suspended by the 19 APC legislators.

The budget will not be enacted into law until a clean copy is presented to Governor Fayose for approval.