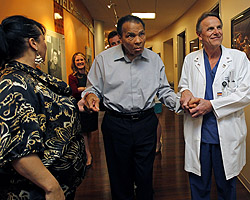 Boxing legend Muhammad Ali is in a stable condition after being treated in hospital for pneumonia.

Ali’s spokesman Bob Gunnell, who confirmed that three-time world champion has ‘’a mild pneumonia,’’ the prognosis is good.

Every other detail about the 72 year-old, including the hospital where he is receiving treatment will not be disclosed due to his family’s request for privacy.

The American’s last public appearance was in September, when he attended a ceremony in his hometown of Louisville, Kentucky, for the Muhammad Ali Humanitarian Awards.

The father of nine, retired from boxing in 1981 and has suffered Parkinson’s disease for 30 years.