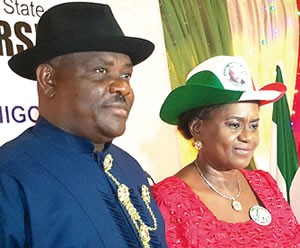 Presenting Mrs. Banigo to the public on Tuesday, Wike said his choice of a female running mate was influenced by the desire to encourage women to take active role in politics.

“The search has ended. Dr (Mrs) Banigo is a rare breed and a leader with uncommon traits. She will join us to rebuild the state. Her choice was informed by the need to create a special place for women to play active role in the politics of the state,’’ Wike said.

“Since 1967 when the state was created, no woman has been given such an opportunity. Yet, the history of the state is replete with women of great achievements.

Banigo, a retired public servant had served as Permanent Secretary and Secretary to the State Government – SSG in Rivers State.