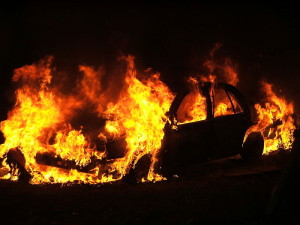 Properties worth millions of Naira were destroyed following an attack on the palace of Oba Lasisi Ogunseye, the Onijoko of Ijoko, Ifo Local Government Area, Ogun State at the weekend.

According to reports, a group of suspected thugs set the Oba’s palace on fire during the fracas which a source told www.247inquirer.com was caused as a result of dispute between rival Obas, Ogunseye of Ijoko-Egba and Onijoko of Ijoko Town, Abdul Fatai Matanmi.

Men of the Nigerian Police Force from Odo-Eran and Ota divisions have been patrolling the area to secure life and properties.

Ogun State Police Public Relations Officer – PPRO, Muyiwa Adejobi, who confirmed the incident said the command was investigating the matter, adding that suspects would be prosecuted.

Adejobi also said in a statement Sunday that the Command has arrested nine suspects and recovered arms and ammunition in connection with the violence that rocked the town.

“Following the recent crises that rocked Ijoko Otta town in Ado Odo Otta Local Government area of Ogun State, the OGUN state police command has embarked on proper investigation by pouncing on the perpetrators of the crises that lasted for days and arrested (9) nine suspects with arms and ammunition,’’ a satetment issued by Adejobi said.

The two Obas, Oguseye and Matanmi have been invited by the police for interrogations on their alleged involvement in the unrest that lasted several days.

Properties, including the burnt palace, cars, ‘’important documents,’’ clothes and jewelries were said to have been destroyed.

Unconfirmed report however, said Oba Ogunseye was away in Ibadan during the unfortunate incident.