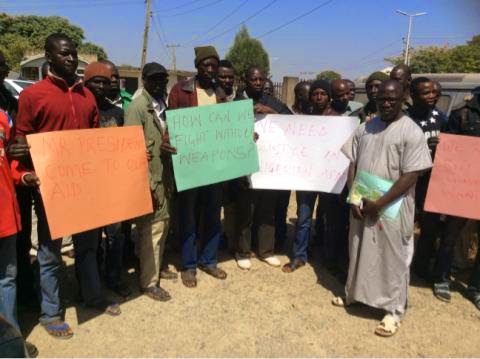 Over 200 members of the Nigerian Army allegedly sacked by the military authorities have called on president Goodluck Jonathan to intervene in their ‘’unjust’’ dismissal.

The soldiers, who were reportedly serving with 3 Armoured Division in Jos, Plateau State Friday stormed the State’s chapter of the Nigeria Union of Journalists – NUJ Secretariat to express their displeasure over the sack.

The aggrieved soldiers claimed they were dismissed without any known offence and without the benefit of fair hearing.

Sergeant Abiona Elisha, who led the protest, alleged that 227 soldiers were dismissed on Tuesday following their return to the base after fighting the dreaded militant group, Boko Haram in Yobe and Borno States.

“All of a sudden, we were recalled to the barracks and made to face trial. Even in the trial, we were not given the chance to defend ourselves. They just took decision and dismissed us. We were not even told what our offences were during the so-called trial,’’ Elisha said.

He further said: “We are surprised that we can be treated like this in our own country. We were sent to fight insurgents without weapons. A lot of our colleagues were killed in the course of defending our fatherland. Even those who are in hospitals treating injuries they sustained from battlefields were also dismissed while still on hospital admission,’’

“The worst situation is that families of our colleagues killed in Adamawa and Yobe are languishing in hunger as Nigerian Army refused to pay their entitlements.