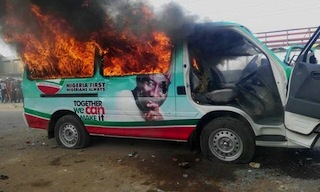 A group of angry youth Saturday set ablaze a bus branded with President Jonathan’s posters after an attack at Zololo Junction, in Jos.

Gen. Buhari, who is representing the All Progressives Congress –APC, in next month presidential elections the trend of uncontrolled in Nigerian politics has to come to an end.

He said every life is sacred, adding that it was his intention to bring change to Nigeria peacefully.

Buhari also called on the ruling Peoples Democratic Party –PDP, to join the campaign for peace.

“Like I said after the attack on our supporters in Rivers this week, elections are not war. Electoral violence is unacceptable.

‘’From terrorists to wanton hooligans, this government needs to step up and do its job.

“Find perpetrators of violence as soon as they act, irrespective of who they are or who they align with, arrest them and let them face the full wrath of the law.

“We have a government in this country. It cannot continue to abandon its responsibility to ensure peace. It needs to do its job’’ Gen. Buhari said.