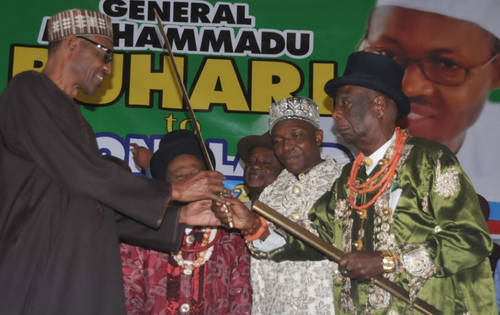 General Muhammadu Buhari has promised to readdress the alleged ‘’betrayal’’ of the Ogoni people the Federal Government if he won the February 14 elections.

Buhari, who is representing the All Progressives Congress -APC, in next month’s presidential election said the decision of the Federal Government to abandon the Bodo-Bonny road project is a case of incompetence and social injustice.

The former Head of State promised to implement the United Nations Environment Programme –UNEP report and reactivate abandoned Federal Government projects in Ogoni land if he became the President.

He told the people of Ogoni during a meeting with stakeholders of the Ogoni Ethnic Nationality at Saakpenwa, Thursday, that he would ensure that an APC led Government under him fulfilled all its promises in the land.

“The decision of the Federal Government to abandon the Bodo-Bonny road project is a clear case of incompetence and social injustice. It amounts to neglect at the highest level. A lot is taken from Ogoniland and relatively, a little is brought back in return. I assure you that an APC-led Federal Government will fulfill all its promises in Ogoniland,” Buhari said.

Gen. Buhari urged the Ogoni people to get their Permanent Voters’ Cards in order to vote en-masse for the APC at all levels in the general elections.