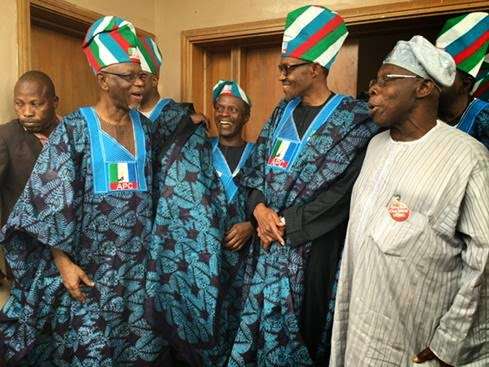 The APC candidate and his campaign team asked for for Obasanjo’s blessings and support support despite his party colouration.

Buhari said: “I have come with my running mate, who is also your son from Ogun to solicit your support and blessings in our journey. You know this country far better than any other person and we believe that with your wealth of experience and support, APC will do more better than what this government is doing.

“The issue of insecurity, unemployment, economic slide, corruption and others will be tackled with all sincerity and we promise to move this country to what you dreamt it will be.

In his response, former President Obasanjo urged politicians to focus the issues that require urgent solutions in the country during their campaigns.

“Let me say that for those of you that are campaigning all over, it is better you tell the people what you will do for them, campaign based on issues and not on frivolity or abusive languages. Every party has its good and bad, which you always use to campaign against yourselves but when government is formed, we must all come together for the betterment of the country,”

Obasanjo later wished General Buhari and his party well in their presidential journey without categorically throwing his weight behind the former military leader.