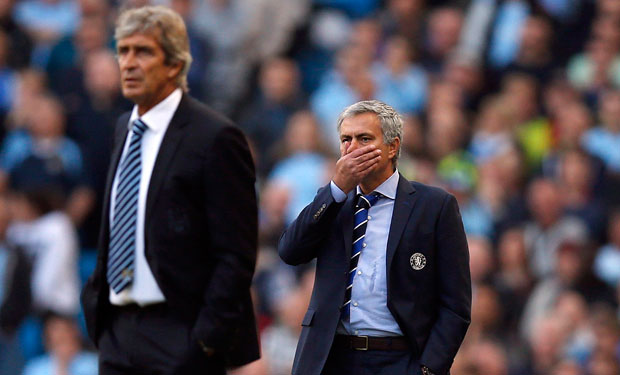 GAME OF THE WEEK –

A record 26 broadcasters will film the most talked about football match around the world this weekend between Premier League leaders, Chelsea and Champions, Manchester City which will be beamed to 175 countries.

The world expect to see thrills and spills from Jose Mourinho and Manuel Pellegrini, two top European managers, whose rivalry could be traced back to Spain.

Manchester City have not won in three games, losing out of the FA Cup to a team from the Football League following a midweek training jaunt to Abu Dhabi, and have not kept a clean sheet in seven matches since Christmas.

Yaya Toure and his compatriot, Wilfried Bony, recently signed from Swansea City, are still at the Africa Cup of Nations with the Ivory Coast.

Chelsea, again, like City will miss the services of their highest goal scorer, Diego Costa, who starts a three-match ban, and possibly Cesc Fabregas Saturday.

With other doubts surrounding the fitness of Branislav Ivanovic, Filipe Luis and John Mikel Obi – and with Mohamed Salah and Andre Schurrle on the way out – the Blues squad look very thin.

Mourinho cancelled the usual media conference on Friday in what looks like a protest against the FA charge and allegations of media campaign being waged against his team.

Unlike the Portuguese, Pellegrini wore a smile as he swept into his media briefing, but declined a free hit at Mourinho.

Chelsea have conceded only three goals at home in the EPL all season and have kept 15 clean sheets in their last 18 home league games. Goalkeeper Thibaut Courtois has not let in a goal in the league at the Bridge since Charlie Austin’s on November 1.