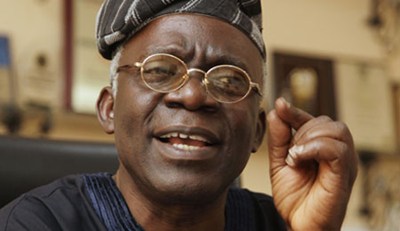 A Senior Advocate of Nigeria –SAN, Mr. Femi Falana has described police parade of crime suspects before the media ahead of trial as ‘’illegal.’’

The Lagos based lawyer condemned the act and urged the Nigerian Police Force to desist from doing such.

Speaking with a group of journalists in his office, the Human Right activist argued that such parades contravenes Section 35 of the Nigerian Constitution, which according to him, guarantees the dignity of suspects.

Falana implored the Inspector General of Police -IG, Suleiman Abba, to issue warnings to all law enforcement agencies to desist from the ‘’illegal parade’’ and the ‘’extra-judicial killing’’ of criminal suspects without trial.

According to him, about 527 suspects were arrested and paraded by the police across Nigeria in 2014 alone.

He said: “In spite of the presumption of innocence which inures in favour of criminal suspects by virtue of Section 36 of the Constitution and Article 7 of the African Charter on Human and Peoples Rights Act, the law enforcement agencies in Nigeria have continued to subject persons to media trial before arraigning them in courts. By subjecting suspects to media trial before arraignment in a court the fundamental rights to fair hearing and the dignity of their persons are infringed upon by the state.