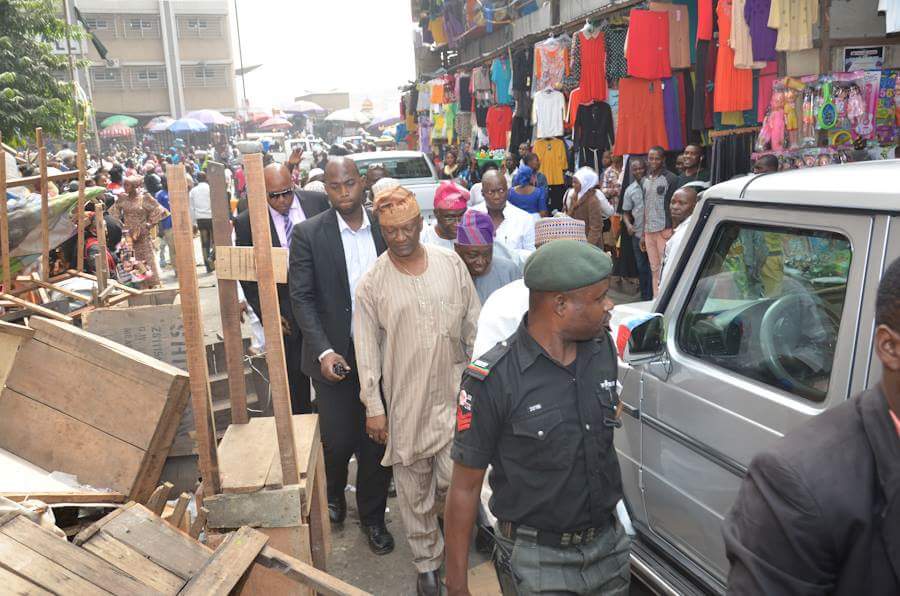 Lagos State Governor, Raji Fashola says his government will stand by traders whose properties were destroyed during Monday’s fire disaster at the popular Balogun Market on Lagos Island.

Governor Fashola visited the scene of the ‘’sad’’ incident Tuesday and appealed to market leaders to assist the government in identifying traders who suffered serious losses, so, they could be assisted.

Fashola told the traders, who gathered in their numbers during the governor’s visit, to liaise with the state’s Commissioner for Special Duties in order to ensure accurate number of victims who were affected.

“We want to know what the estimate of losses are. You have to liaise with the market leaders. We will help you. This will also apply to all the plazas affected. It is impossible for us to count the number of people while we are here.

“The Commissioner for Special Duties is here, he will liaise with all the people and the plazas affected to have a clear view of the type of businesses they do and the estimate and we assure you that we will help you,” he said.

He also appealed to the traders to avoid illegal connection of power/electricity, saying in formation reaching him showed that the inferno was a result of an electrical surge.

He said: “I know there is problem with electricity, but we must be careful how we use the alternatives available to us like generators and illegal connections in order to avoid risk.’’

‘’I appeal to Lagosians because of the dry season we are in as there is the risk of fire. You have to stop storing inflammable materials in your homes and plazas and switch of any appliances not in use,’’ the governor said.

Agbaje decried the condition of the market, which, he said, contributed to the fire outbreak and inability of fire service officers to curtail it on time.

The PDP governorship aspirant however, promised better conditions for markets in the state, if elected.

‘’I will not only build more and affordable markets to meet up with expansion in the state like Alhaji Jakande did, I will ensure that they have basic amenities,’’ Agbaje said.

“I feel the plight of the traders in Lagos selling in markets that lack basic amenities including water, toilets and motorable roads.