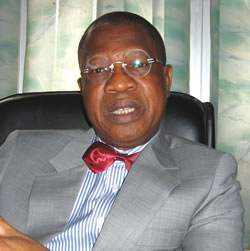 The All Progressives Congress –APC says it has been vindicated following President Goodluck Jonathan’s statement that corruption and insecurity were two of the major challenges facing the country.

Jonathan had promised in his New Year speech, that the Federal Government would fight corruption and ensure that members of the Islamic extremist group, Boko Haram are arrested and prosecuted.

In a swift response to the President’s speech,  APC, on Friday issued a press statement saying the President does not have the capacity to fight corruption and insecurity.

According to the statement signed by the party’s National Publicity Secretary, Alhaji Lai Mohammed, the government has failed to fight what it considers as the two major problem facing the country since the Peoples Democratic Party –PDP, assumed power though six years ago.

”A President who has spent the last six years trying to diagnose the main problems facing the country will apparently need another four years to plan how to tackle the challenges. By then, all of us would have been buried under the rubble of corruption and our country would have been decimated by insecurity.