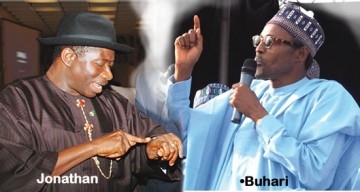 President Goodluck Jonathan challenged the All Progressives party –APC, to tell Nigerians how the opposition party intends to tackle the menace of corruption in the country.

Addressing the crowd the PDP presidential campaign rally in Enugu on Friday, Jonathan describes Gen. Buhari as being too ‘’old’’ to handle the country’s problems, claiming that the former Head of State could not solve the problem during his reign as military Head of State when he was still young in the 80s.

He said: “Is it now when he is old that he would be able to handle them better?”

President Jonathan however, disclosed his intention to fight corruption through the use of technology.

“With technology, you can track down criminals. I am not going to run Nigeria on my heartbeat but according to international best practices.

“I don’t expect somebody to rule a country like a king in the medieval days. You must run it like a democratically elected President. Some people are saying that Goodluck must go and yet they are promoting policies of the 1970s when most Nigerians did not have television.

“They say that government is not fighting corruption. They want me to lock people up and show them on television’’ President Jonathan added.