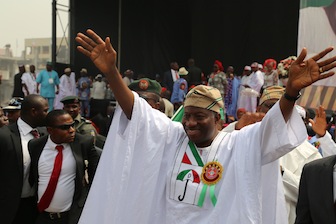 President Goodluck Jonathan Thursday flagged off his re-election campaign in Lagos touting the successes of his regime since assuming power.

Though, Jonathan’s re-election bid is coming at a time when the most populous black nations in the world faces a growing terrorism uprising, the incumbent leader told a full capacity crowd at the Tafawa Balewa Square, Lagos to vote for him based on his achievement so far in order to move the country forward.

The 57-year-old his government for promoting agriculture and industry and recently privatizing the troubled electricity sector, though, his opponents will dismiss that as many Nigerians still suffer long power cuts.

On Boko Haram, a menace which has been one of the two greatest weapons Jonathan’s opponents are using against him, the Nigerian president blamed former Head of States, Generals Olusegun Obasanjo and Mujammadu Buhari, for not doing enough to equip the military.

“Ask them, when they were Head of State, how many rifles did they buy? How many attack helicopters did they buy? Even if you have $10 billion, you can’t equip the military overnight,’’ Jonathan said.

”They refused to build capacity, they instigated crisis, now they claim they want to come back and stop the crisis. If they had dealt with corruption we wouldn’t have corruption with us today.

He urged Nigerians under the age of 20 to support him, while encouraging them to take more active role in the affairs of the country.

The president said: “2015 election is about the young people. Either you vote young people to be relevant, or vote for irrelevance. I believe all of you want to be relevant. You can see how many of our governorship candidates and see they are in your age bracket.

The president also spoke about Wednesday’s findings of the DSS, saying that his administration has empowered more Nigerians to participate in elections.

“Let me tell you about the voters card. Only yesterday, I directed INEC that all Nigerians should be allowed to vote. Before 2011, no Nigerian complained about voters card.

“Since we came, we empowered Nigerians to have voters cards. Unfortunately, we have heard of people who are cloning voters cards so that our votes will be irrelevant.

Mr. Jonathan’s main opponent in the February 14 election is formerMilitary Head of State, Gen. Buharri, who is representing the All Progressives Congress –APC.

Buhari has consistently promised to put and end to attacks by militant group, Boko Haram and many believe he’s the right person to fight corruption in the country.

However, President Jonathan’s party, the PDP has recently described the retired amry General as ‘’corrupt,’’ saying that the APC presidential candidate owes Nigerians explanations to his involvement in series of atrocities committed during the reign of former dictator, General Sanni Abacha.