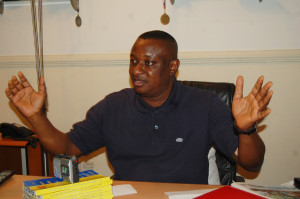 Famous Lagos lawyer, Festus Keyamo says it is the duty of Nigerian elites to explain to the masses, reasons why president Goodluck Jonathan should not be reelected next month.

Keyamo noted that elder states men have sat on the fence for too long, adding that it was high time they told Nigerians, what he calls ‘’the many failings’’ of the president.

In a statement on Sunday, the social crusader expressed concerns over the ‘’embarrassing silence’’ of the people who he said should guide the citizens in choosing the next president.

Keyamo dismissed Jonathan’s claims that he is fighting insecurity and corruption, arguing that the president’s claims could not be supported by any facts.

In an apparent reference to former Aviation Minister, Femi Fani-Kayode, who is currently facing charges of money laundering in court, Keyamo said he was surprised at how the president was comfortable among people whose integrity were questionable.

He said: “If nobody would say it, I will say it because I am the one prosecuting the fellow in court and the case has been adjourned to February 23 and 24 for trial.’’

“Part of the lies told is that the fellow has been freed whereas some of the counts in the charge were just struck out and the court held that he has a case to answer on some other counts,’’ the statement said.

“Yet nobody is asking the president these hard questions. Before Jonathan’s administration, Boko Haram was nothing but a rag-tag group of extremists living in enclaves like Sambisa, while our proud military boys patrolled the towns. Now, under Jonathan, the reverse is the case.

The 44-year-old however hailed All Progressives Congress –APC, candidate in the February 14 election, Gen. Muhammadu Buhari as the best candidate for the office of the presidency.

“All the personal attacks on the person of Buhari in the last few weeks have only convinced me that he is the best available option at this time. Anyone on the weaker side in any argument always resorts to personal abuses and attacks. Have you noticed that on corruption, the only accusation against Buhari is that, he was too high-handed in fighting corruption in the past? In other words, nobody can, or has accused him of lacking the courage, zeal and will to fight corruption.

“On the other hand, the president eats, sleeps and wakes up with corruption. In one of his famous interviews, he did not even see stealing as corruption. That is why he does not see the point why he should not appoint a person standing trial for corruption as his Director of Media and Publicity. He just does not care.