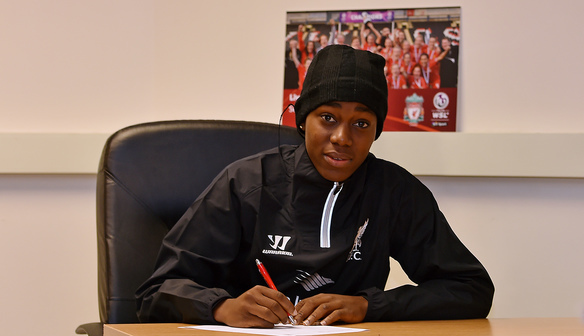 Liverpool Ladies manager, Matt Beard has described the signing of Super Falcon’s striker Asisat Oshola as a ‘’big coup’’ for the English club.

Beard said he was excited to have the African Women’s Player of the Year in his school, especially now that the Women’s Super League is becoming more competitive.

He said: “I’m absolutely thrilled to have signed Asisat as she is one of the World’s top young footballers. Asisat proved in the U20 World Cup what a top class talent she is and this signing is a big coup for us.

“The Women’s Super League continues to improve year after year so it is vital that we strengthen our squad following last season’s successful title defence. This signing is definitely one that the supporters can be extremely excited about.”

Asisat was voted as the most valuable player -MVP at the U20 World Cup in Canada in 2014 , where she finished as the top goals-corer as the Falconets came second after losing to Germany in the final.

The 20 year-old helped Rivers Angels to their first league title victory since 2010 as they beat Pelican Stars to the title as well as helping the team to retain the Nigerian Women’s Cup.