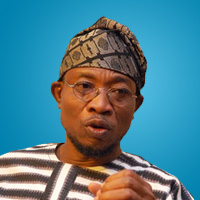 Osun State Governor, Rauf Aregbesola says Gen. Muhammadu Buhari deserves respect from all Nigerians for his accomplishment as a soldier rather than being embarrassed over academic certificate.

Aregbesola said during the Armed Forces Remembrance Day ceremony in honour of fallen soldiers in Osogbo,Osun State Thursday, that the All Progressives Congress –APC presidential candidate in next month’s election deserves commendation for ascending to the top level in the military.

The Governor therefore, demanded an unreserved apology from people attacking Gen. Buhari over claims he is unqualified to run for president.

Mr. Aregbesola said Mr. Buhari deserves the respect of all after rising to the level of a general in the Nigerian Army.

Speaking about the Armed Forces Remembrance Day, Aregbesola said that the ceremony should serve to inspire the hearts of Nigerians to be more committed to the progress and peace of Nigeria.

He said the uniformed men and women are currently engaged in deadly battles against the Boko Haram insurgency.

‘’I refer us to these ongoing battles in order to make the point that the government and the people of this country must in their various ways play the role becoming of them in support of those brave combatants,’’ Governor Aregbesola said.