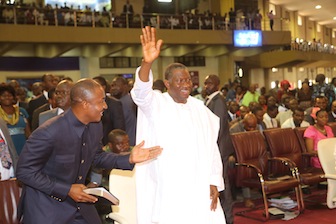 The General Overseer of the Winners Chapel, Bishop David Oyedepo has asked God to bless the President’s endeavour and for an unusual grace to come upon him as the February 14 presidential elections draws closer.

Bishop Oyedepo gave the prayers as President Jonathan joined the congregation to worship at the church, also known as the Living Faith on Sunday.

Jonathan, who arrived the church in a helicopter for the third service said that he was not in the church to campaign.

The president however, urged the congregation to pray for the country ahead of next month’s general elections.

Jonathan said there were a lot of predictions going round in the religious circle concerning who will be president after February 14, but the Peoples Democratic Party candidate noted that he believed in the fulfillment of the will of God.

“There are various predictions concerning the election, but I trust God to take control of the situation. I commend Bishop Oyedepo for his commitment to the work of God and education, without education we can’t achieve much,” the president said.