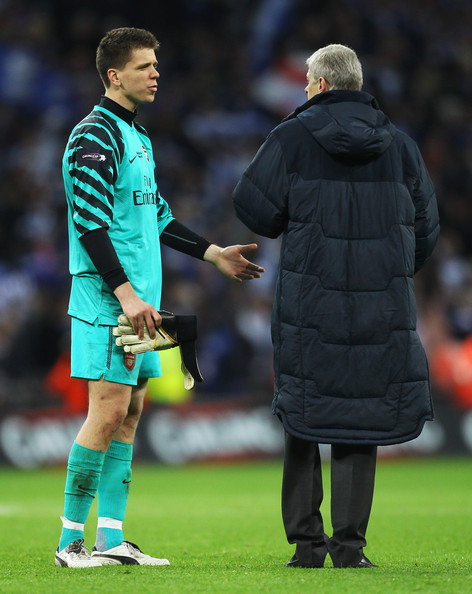 Arsene Wenger has challenged his number No.1 goalkeeper, Wojciech Szczesny to prove himself whenever the Polish gets the opportunity to feature for the Gunners again.

Szczesny was dropped last week after a poor performance against Southampton and the ‘crime’ of being caught smoking cigarette in the dressing room afterwards.

There are no guarantees Szczesny will return for today’s crucial and high-profile match away to Manchester City, but Wenger urged the Polish goalkeeper to emulate City’s No.1 Joe Hart’s response when he was axed last season.

When asked if the punishment was a wake-up call for Szczesny, Wenger said: “I don’t know. It’s up to him. He has played many games and sometimes when you have a little breather it helps you to refocus and get yourself together.

“Just before Southampton he had a very good game at West Ham and was man of the match. I think he is a great goalkeeper and will have a great career. But he goes a little bit.

“I took Jens Lehmann out of the side like that, and City did it with Joe Hart. Your place is never safe because you and I know that every defeat is a crisis in the club.”

Meanwhile, the Frenchman has revealed that he is actively searching for at least one defender in the market, particularly after the long-term injury to Mathieu Debuchy.

“My priority is the attitude of the players already here,” said Wenger, “but if we have another injury or two we will struggle. It is risky. It’s too risky,’’ he said.

“Of course we have made enquiries, but there is the handicap of which club wants to sell their best players, especially a central defender, in the middle of the season. They say, ‘okay, come back in the summer, and maybe yes.

Arsenal have been linked in particular with Borussia Dortmund star Mats Hummels, and he would suit their style. But a swift deal seems improbable.