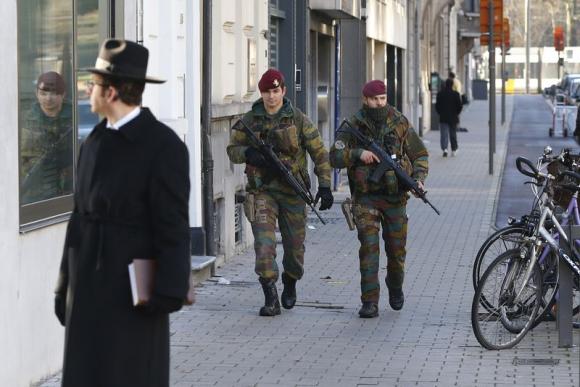 Security has been stepped up across Europe in the wake of last week’s shootings in Paris and a sweeping Belgian counterterror operation two days ago.

Belgium joined France in deploying its military alongside police to counter the threat of potential terror attacks Saturday.

Soldiers in camouflage gear and police were seen guarding the Jewish Museum and the Great Synagogue of Europe in Brussels, while some roads in the area were closed to traffic.

The move follows a series of police raids that authorities said targeted a terror cell on the brink of carrying out an attack against police officers.

An attack at the Jewish Museum in Brussels last year by an accused gunman suspected of having joined ISIS in Syria left four people dead.

Defense Minister Steven Vandeput told a news conference Saturday that besides Jewish sites, a number of embassies in Brussels also were being protected, including those of the United States, Israel and Britain.

Meanwhile, a total of 122,000 police officers, gendarmes and military personnel are deployed across France as part of the security plan.

According to Belgian officials, three people remained in custody on Saturday while the Paris prosecutor’s office confirmed 12 in the Paris region in connection with the investigation.

Al Qaeda in the Arabian Peninsula, al Qaeda’s Yemen affiliate, claimed responsibility Wednesday for the Charlie Hebdo shooting. One or both the Kouachi brothers are thought to have traveled to Yemen.