..Says INEC Chairman Is Working In Collaboration With Emirs To Ensure Northern President 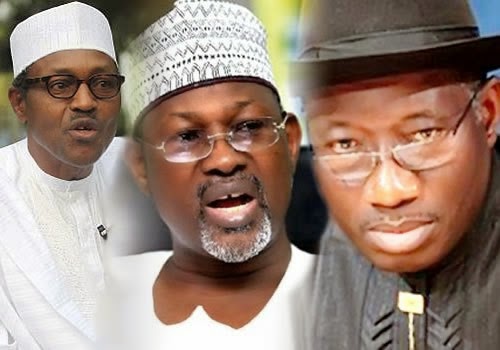 A cross section of President Goodluck Jonathan’s loyalists have called for the arrest of the Chairman of the Independent National Electoral Commission –INEC, Prof. Attahiru Jega.

Acting on the name, Southern Nigerian Peoples Assembly –SNPA, the group accused the INEC Chairman of releasing Permanent Voter Cards -PVCs, to some unnamed politicians and Emirs in the North.

SNPA also demanded for the sack of Jega, while soliciting for the postponement of this month’s general elections.

The group alleged that the leader of the electoral commission for responsible for the inadequate Personal Voter Cards –PVCs, in certain part of Nigeria.

According to SNPA, Prof. Jega ensured that the voter cards were effectively distributed in ther Northern part of the country.

A member of the group, Femi Okunrounmu alleged that the INEC Chairman purportedly ‘’met with select leaders of the Northern Elders Forum twice in August 2014 to strategize modalities for enthroning a Northern president.

He said: “We authoritatively gathered with unassailable and incontrovertible evidence that the INEC Chairman, who was away in Lagos for an official engagement, through one of his National Commissioners that represented him, met with select leaders of the Northern Elders Forum, led by Prof. Ango Abdullahi, on the 20th August 2014, where strategies and modalities for enthroning a President of Northern extraction through vote rigging were discussed and agreed upon.’’

“The meeting was sequel to an earlier meeting of Northern Elders Forum held on 16th August, 2014 at Arewa House, Kaduna, under the chairmanship of Ambassador Yusuf Maitama Sule where it was resolved that all avenues must be explored towards enthroning a President of Northern extraction in the forthcoming 2015 elections,’’ Okunrounmu added.

SNPA is clamouring for the re-election of President Goodluck Jonathan as president in this month’s poll.