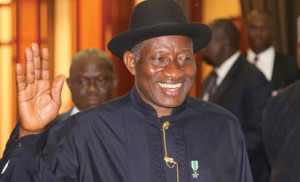 THE suit challenging the eligibility of President Goodluck Jonathan before a Federal High Court, Abuja has been withdrawn by the plaintiffs.

Justice Ahmed Mohammed, who struck out the suit on Wednesday, ordered the plaintiffs to pay N50, 000 to President Jonathan whose lawyers had been made to file responses before the decision to withdraw the suit.

The counsel representing the plaintiffs, Mr. Alex Akoja, told the court on that the plaintiffs gave the instruction to withdraw the suit and the notice of discontinuance was subsequently filed on February 4.

The court had on February 3, 2015 fixed Wednesday for the hearing of the suit.

The plaintiffs contended that Jonathan was ineligible to re-contest for the office of the President.

They argued that allowing Jonathan to do contest could amount to spending more than eight years allowed for anyone to serve in the office.

Two other suits challenging the president’s eligibility to seek another term in office, are still pending before Justice Mohammed.