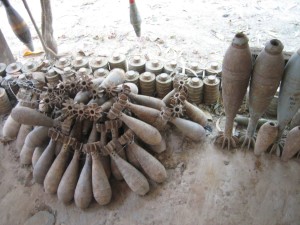 THE Borno State Police Command has recovered 147 unexploded bombs in different locations, including a house purportedly belonging to a top Federal Government official.

The explosives, known as Cluster Ordinances –UXOS, were discovered in two locations within the state, according to the state Police Commissioner, Mr. Clement Aduda.

Some of the explosives, which police suspected belonged to Islamic extremist group, Boko Haram, were found in a house in Maiduguri, while others were discovered at village, few kilometres from the capital city.

Aduda, who said that the police were alerted by spirited and vigilant residents, noted that the second bomb cache was discovered in a boy’s quarters of a house belonging to a senior Federal Government official in the city.

He said: “I am glad to inform you that at about 9 am on February 8, 2015, 147 unexploded Cluster Ordinances –UXOS, were recovered at about two kilometers away from Sumo village, near Jakarna, Konduga Local Government in Borno State by a combined team of Bomb Disposal Unit, policemen with troops attached to Jarkana general area.”

The police commissioner said the bombs were suspected to have been kept by Boko Haram for the February 1 attack on Maiduguri.

He said the bombs have since been destroyed.