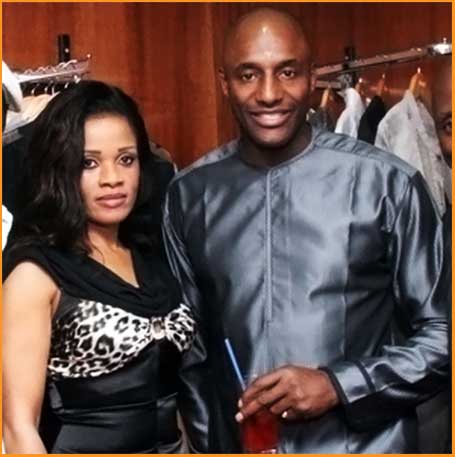 SOCCER legend and presenter of the Nigerian version of TV’s Deal or No Deal, John Fashanu has accused his wife of trying to kill him – after she allegedly found him bedding two women at the same time.

The retired former Wimbledon and England striker said estranged Abigail Onyekwelu went for him with a knife during a furious row at their home.

Fashanu is now at the centre of a bitter divorce battle with Abigail – and insists she cheated on him with a woman.

She denies his claims and the ­astonishing battle, which includes the ­accusation that he bedded their maid – is to be played out in the high court in Abuja, Nigeria.

But 52-year-old Fashanu, dubbed Fash the Bash for his hardman reputation in Wimbledon’s famous “Crazy Gang” – hit back with an extraordinary series of allegations.

He said he had to call in police to protect him from knife-wielding Abigail and was devastated to find her in bed with another woman.

He also alleged that she stole thousands of pounds in cash from their marital home.

Fashanu said: “She attempted to use knives on me. It was terrifying.

“My life was at stake, there’s no two ways about that.

6ft 2in Fashanu added: “My life was at risk and I didn’t want it to happen again. That’s why I filed for divorce.”

He denied his wife’s claim to have discovered him in bed with two other women – one of them their maid.

“I’ve been very fortunate to date some of the most beautiful women in the world,” Fash insisted. “I certainly don’t have to sleep with my cleaner!

“This is me, John Fashanu, you’re talking to. It’s absolute nonsense. If she wants to make up that ­story, at least let her say it’s Beyoncé or someone.

Abigail is the mother of former beauty queen Adaeze Yobo. Fashanu met her in 2009. They married two years later but the relationship hit the skids last year.