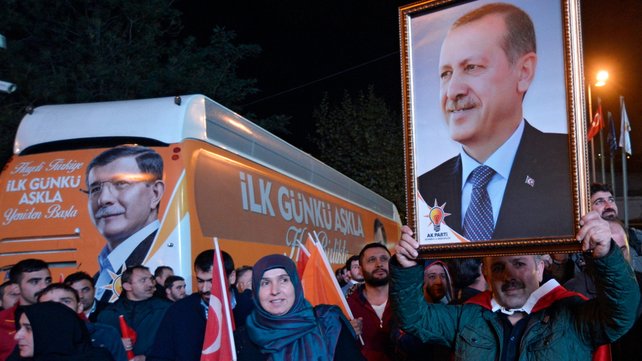 TURKEY’S long-dominant Justice and Development Party – AKP, scored a stunning electoral comeback on Sunday, regaining its parliamentary majority after a pivotal at the weekend.

The party founded by President Recep Tayyip Erdogan won 49.4 percent of the vote to secure 316 seats in the 550-member parliament with nearly all votes counted, easily enough to form a government on its own.

The result is a huge personal victory for 61-year-old Erdogan, Turkey’s divisive strongman who may now be able to secure enough support for his controversial ambitions to expand his role into a powerful US-style executive presidency.

The outcome of the vote was a shock to many, as opinion polls had predicted a replay of the June election when the AKP won only 40 percent and lost its majority for the first time in 13 years.

Speaking later to thousands of people who waited for hours in the cold to hear him speak, Prime Minister Ahmet Davutoglu, vowed to protect the human rights of all of Turkey’s 78 million inhabitants.